Amphibians spend much of their lives underground, often utilizing the tunnels of burrowing small mammals, or under rotting logs. They are most likely to be seen during migrations over land, to and from breeding sites, or in water when breeding.

Long-toed Salamander (Ambystoma macrodactylum)
Long-toed Salamanders prefer moist vegetation near water sources in forests, prairies, or mountain meadows. They are active at night, spending most of the year underground in
rodent burrows. In spring, around April or May, they spend their time in a group under rocks and rotting logs. In colder regions they will hibernate. When disturbed, they wave their tail while secreting an adhesive white poisonous liquid to deter predators. In extreme cases it will drop its tail as a distraction and run for it. 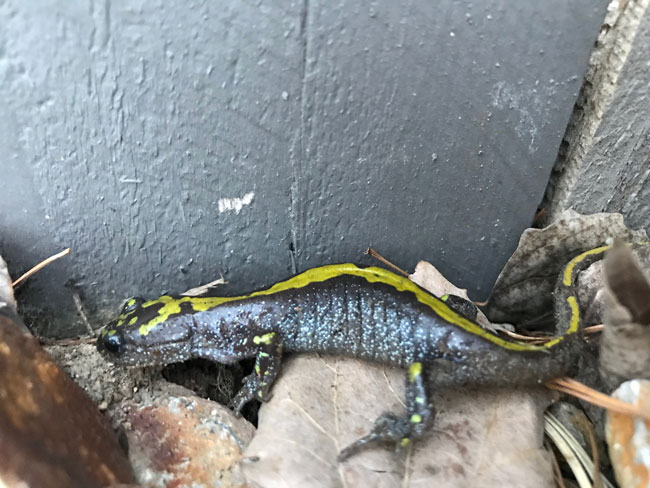 Northwestern Salamander (Ambystoma gracile)
Eggs of the Northern salamander are suspended in small grapefruit-sized globs, or clear or algae green gelatin, attached to plants below the surface on the edge of marshy ponds.

When disturbed, they make a ticking sound and get into a defensive posture, closing its eyes. 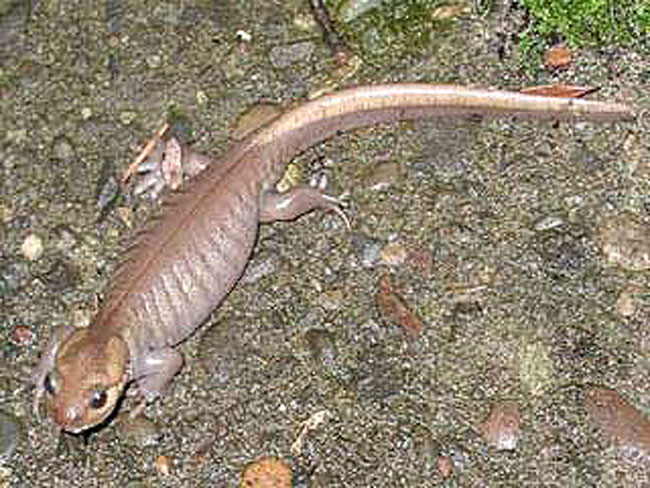 Great Basin Spadefoot (Spea intermontana)
Great Basin spadefoots live in dry sagebrush, grasslands, and woodlands with sandy soils near ponds. They are most active at night. They spend most of the year (seven to eight months) in underground burrows. They eat flies, caterpillars, moths, spiders, centipedes, millipedes, earthworms, and snails.

They make a duck-like mating call that can be heard great distances. Females attach several small clusters of eggs to floating sticks and submerged vegetation in the shallows of a pond. Unlike other amphibian eggs, individual eggs can be easily removed from the cluster. 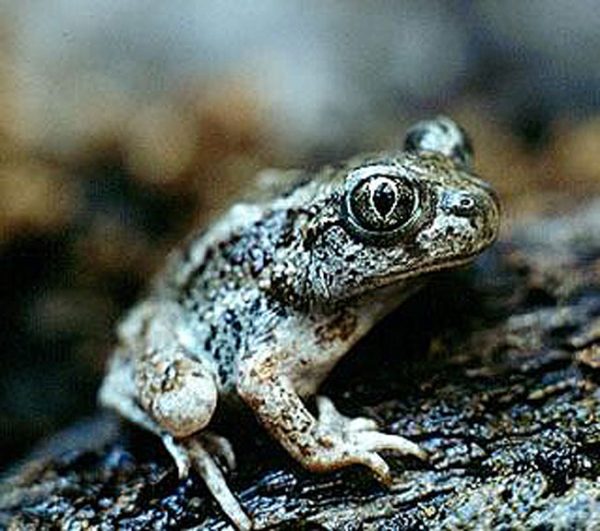 Western Toad (Bufo boreas)
Western toads live mainly on land in a range of habitats from forests to mountain meadows to desert flats. Western toads are most common near marshes and small lakes. In Central Oregon between May and June, adult breeding-age toads migrate from the dry forest floor to waterways. Outside of the breeding season, Western Toads are nocturnal, spending the day buried in the soil, concealed under woody debris, or in the burrows of other animals. Their diet consists of spiders, beetles, flies; they will eat insects that are almost as large as they are. By late July to early August, thousands of young toads are ready to make the journey from cool waters to drier conditions. Instead of jumping, toads move overland by climbing or crawling. When threatened, Western toads may secrete a mild, white, nauseating, burning poison as a deterrent to predators. Ravens, an effective predator of Western toads, manage to separate the skin, which they leave behind. 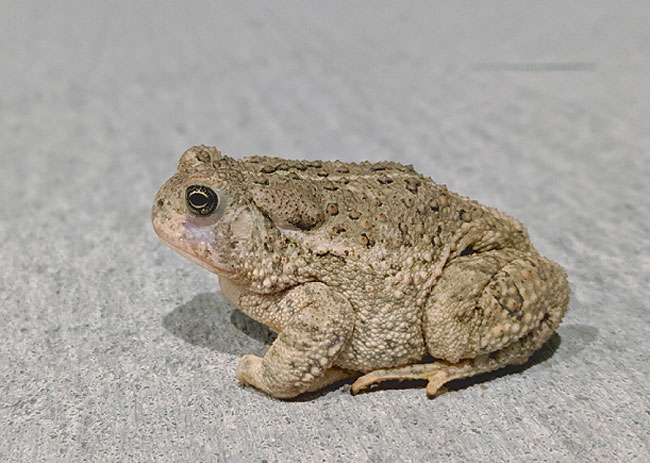 Pacific tree frog (Pseudacris regilla)
Pacific tree frogs are usually found in grass or shrubs near water during breeding season. During the non-breeding season, this amphibian is found in various habitats that can be quite distant from water, including woodlands, pastures, meadows, and urban locations. They may even find shelter in tree cavities. Individuals living east of the Cascades move into underground burrows dug by other animals or stay in streams or springs during times of dry weather. Their diets consists of spiders, beetles, flies, ants, and other insects; they can and do eat insects that are almost as large as they are,

Male tree frogs can be easily identified by their krr-r-r-ek call, which they make most of the year. Males are smaller than females and have a dark patch of skin on their throat. Pacific tree frogs have the ability to change color from brown to green. Color changing is triggered by changes in vegetative surroundings. 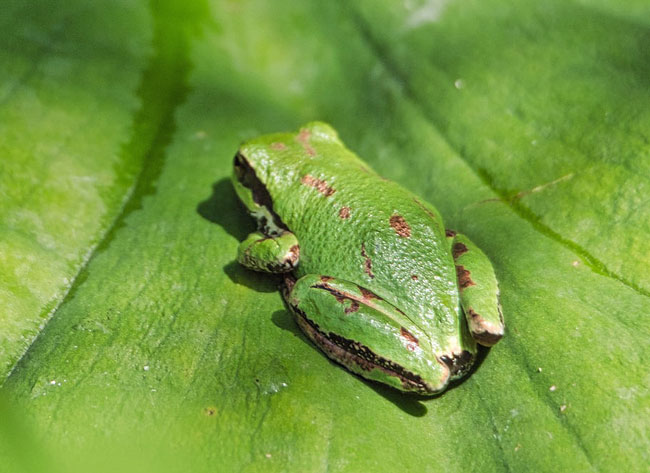 American bullfrog (Lithobates catesbeianus)
Bullfrogs are native to the eastern and midwestern United States and southeastern Canada. They seldom venture far from the vegetated banks of a body of permanent standing water. This non-native frog aggressively competes for food and living space with our native frogs. Adult bullfrogs will eat nearly any animal it can swallow including other frogs, fish, small mammals, and ducklings. Bullfrogs can lay almost 10 times more eggs than native frogs and can quickly out number them. During winter bullfrogs live in mud on the bottom of ponds. They may migrate overland to ponds over a mile away. 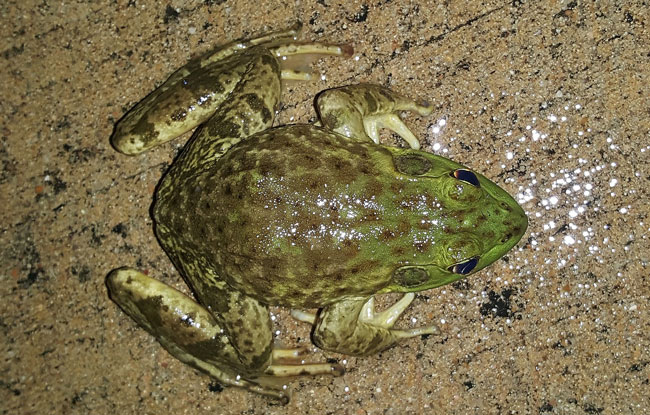 Northwestern Salamander (Ambystoma gracile)
Found in a variety of moist habitats including open grasslands, woodlands, and forests near freshwater sources. They are rarely seen because they are active at night.

Oregon Spotted Frog (Rana pretiosa)
Oregon Spotted Frogs usually live near cool, permanent, quiet water, such as marshes, ponds, lake edges, and slow streams. They appear to prefer waters with a bottom layer of dead and decaying vegetation. When frightened, they hide in dense vegetation or under debris at the bottom of shallow wetlands. Adult frogs hibernate during the winter in freeze-free seeps, springs, and channels (sometimes in mud bottoms at least one foot under water) connected to their breeding waters. Their diet consists mostly of insects.

Spotted frogs follow a fairly reliable routine of considerable activity and movement beneath the ice during the first month following freeze-up. Little movement is observed under the ice in January and February, but activity steadily increases in mid-March, even when ice cover persists.

Over the past 50 years, the Spotted frog has experienced a dramatic reduction in range in Oregon and Washington. The Oregon spotted frog has lost at least 78% of its former range of very southern Canada to northern California. The causes of the decline are not fully understood. However, the reduction of wetlands and the introduction of bullfrogs and non-native fish have had an impact. 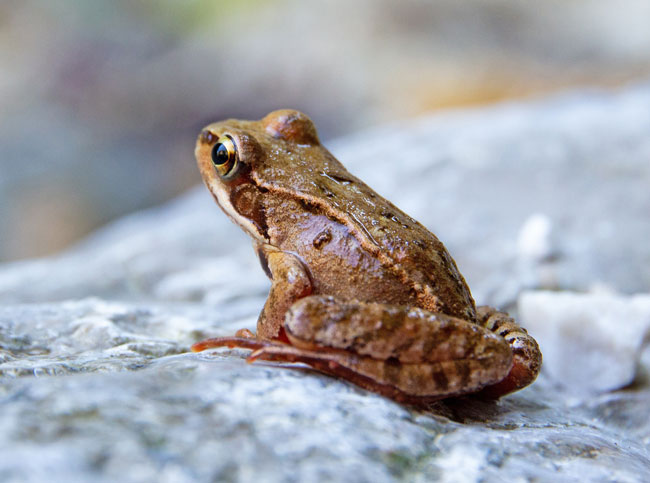