If you found an injured or orphaned beaver, click here. Our Beaver Works program works to support beaver and the required components and processes that 1) sustain them, 2) allow them to function as keystone species 3) prioritize these efforts in areas of their former range where they will have the largest impact on climate resiliency and 4) provide social systems to provide the individuals, their habitat and systems with long-term protection from human disturbance.​

American Beaver (Castor anadensis)
The beaver is by far the largest North American rodent; the body can be 2.5 feet to 4 feet long, not including the tail, and weigh more than 60 pounds. Over 10 million years ago, there was a giant beaver species the size of a black bear. In Oregon, the beaver occurs in suitable habitats throughout the state. It is almost always associated with riparian habitats bordered by a zone of trees, especially cottonwood and aspen, willow, alder, and maple. Small streams with a constant flow of water that meander through relatively flat terrain in fertile valleys and are subject to being dammed seem especially productive of beavers.

Beavers construct dams and lodges in many but not all areas where they live, using cut branches, logs, and mud. Dams made in streams and around the edges of wetlands are constructed to increase the depth and area covered in water. Dams can be over 6 feet high and 160 feet long. Dams in small streams are inconspicuous. Lodges are built in a body of water. They range from 6 feet to more than 30 feet across. Instead of constructing a lodge, some beavers excavate burrows into the banks along streams and ponds. Beavers are most active in the evening or at night but they can sometimes be observed engaging in various activities at any hour. Beavers do not hibernate, although activity during winter may not be conspicuous because it is largely beneath the ice.

Beavers live in colonies composed of family groups usually consisting of a mated pair of adults, their yearlings, and their young-of-the-year, although occasionally groups may contain individuals over 24 months old, other than the mated pair. Pairing is commonly considered monogamous and long term.

Two-year-olds must disperse in search of new watersheds, where they pair up, commonly for life. While searching, they may be found far from suitable streams.

They are excellent swimmers and divers; they can remain under water for more than 15 minutes. When swimming at the water surface only the head is usually visible. 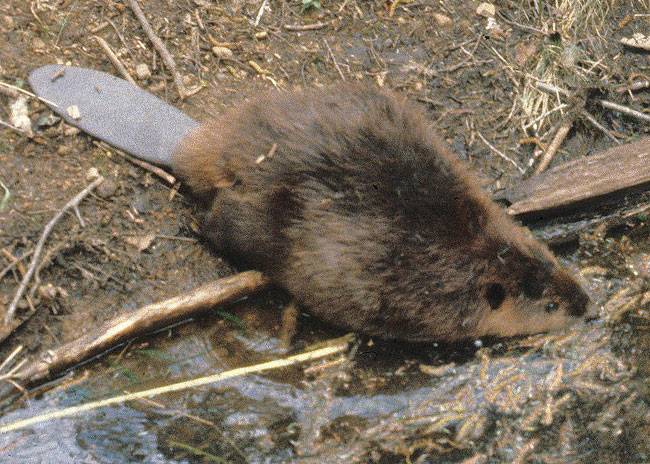