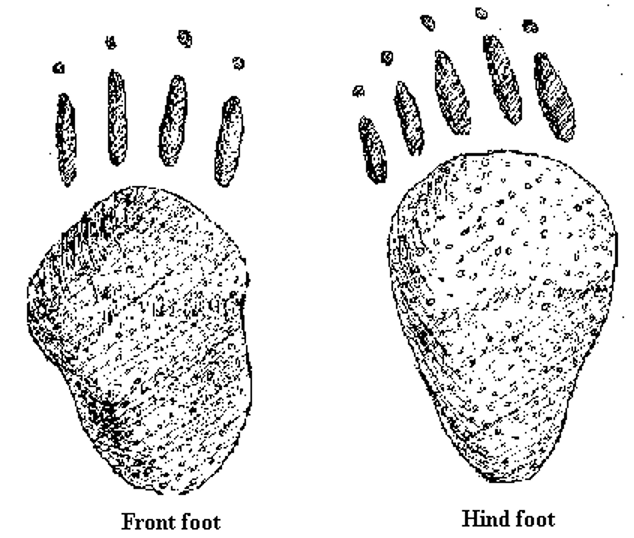 The winter season is among us, bringing along frigid temperatures and possibly snow!  During the winter months, many Central Oregonians feel disconnected from nature and the wildlife around us. Still, we can stay connected through one important thing - tracks! Though many of our local species are tucked away till spring, you'd be surprised at how many creatures are still out and about. Consequently, there are plenty of animal tracks and prints to follow, especially once a layer of snow has covered the ground.  This blog will share some common wildlife tracks you may find in our area and what species they belong to! 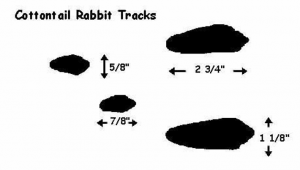 There are various native rabbits in Central Oregon, including the mountain cottontail, black-tailed jackrabbit, and pygmy rabbit. Rabbit tracks are frequently found in the winter snow. The prints of each type of rabbit are very similar, varying slightly in shape and mostly in size. Below I will share a picture of a Mountain Cottontails tracks. 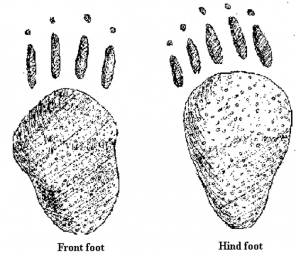 Cottontail rabbit tracks are oval-shaped, with five toes on each foot (although only four can usually be visible).  Their hind feet are typically longer than their front feet.

The Porcupine can be found throughout Central Oregon year-round, as they do not hibernate. They are known to be short-legged mammals with around 30,000 quills covering their body. They are mostly nocturnal, but they may be spotted at any time, especially while up in trees.

Porcupine prints are unique and easy to identify. There's usually drag marks created by their tails when they walk. Their front prints are smaller than those made by their hind feet, and the front foot has four toes while the hindfoot has five. 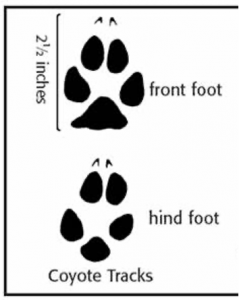 The Coyote is a small wolf-like animal common in almost all regions of Oregon. They typically grow a warmer and thicker coat in the winter.

Coyote prints are commonly confused with a dog's paw prints. You'll find that a coyote's paw print is slimmer than a dogs', and each middle pad is tucked behind the front pads.  They are ovular shaped and usually have defined claw marks. The hindfoot is smaller than the front foot, which is generally around two inches on an adult. Coyotes often walk-in straight paths.

Spotting elk and deer in Oregon is not rare, and they can be found throughout the state. In the winter, elk and deer migrate to Central Oregon places with lower elevation to ensure their survival.

A deer hoof is split down the middle, ovular, and usually has a pointed end. Deer tracks can vary in shape and size, but they are typically between two and three inches long. Elk tracks, on the other hand, are larger than deer tracks. Their hoofs are similarly shaped to a deer's' but rounder. 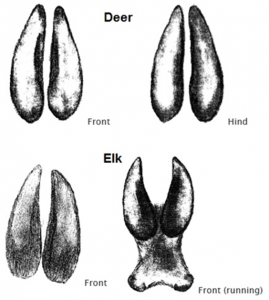 Raccoons are another species in Central Oregon that can be found around the state. They are mostly nocturnal creatures that scrounge for food at night. Raccoons may hide and sleep in "dens" for portions of the winter. However, they are not true hibernators and can still be found roaming around at night.

Raccoon tracks are very distinct, with the front foot substantially smaller and broader than the hind foot. They possess five small toes on each foot and their prints can resemble human hands. 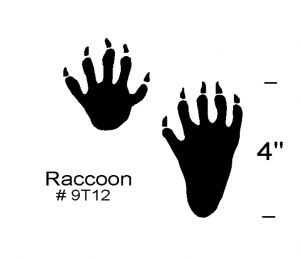 When adventuring in the outdoors this season, be on the lookout for animal tracks! Hopefully, after this blog, you'll be able to identify key characteristics of the prints and figure out what species they belong to. Not only can this be a fun activity, but it helps us connect to our local wildlife and discover more about them!

Think Wild is a 501(c)3 non-profit organization located in Bend, Oregon. Our mission is to inspire the High Desert community to care for and protect native wildlife through rescue & rehabilitation, outreach/education and conservation.