If you find an injured or orphaned squirrel, chipmunk or marmot, click here.

Yellow-pine Chipmunk (Tamias amoenus)
This chipmunk is found in brushy areas in Ponderosa pine and Douglas-fir forests. Their homes are usually burrows, hollows in fallen trees, clefts and crevices in rocky outcrops, rockslides, or lava fields. They are active April through October, during the daylight hours, starting slightly before sunrise, then, following a midday break during hot days of summer. Belowground fungi called truffles are very important in their diet. They do not accumulate body fat in the fall; most likely they rely on stored food during the cooler months. Normally chipmunks wake approximately every two weeks to eat and rid their bodies of waste. 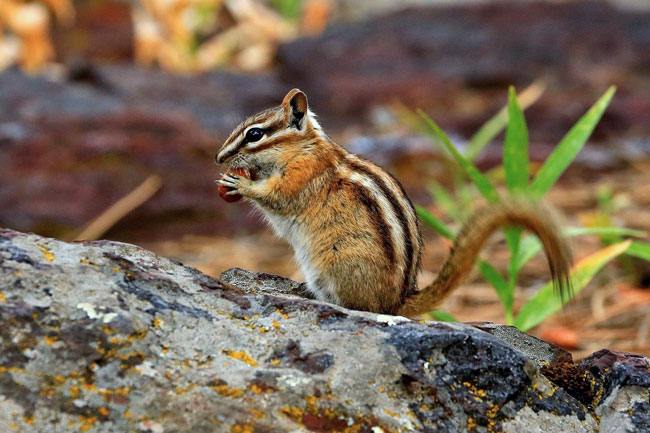 Least Chipmunk (Tamias minimus)
This chipmunk is associated with sagebrush, which may include sagebrush-covered desert valleys or sagebrush in open coniferous forests. Least chipmunks are active during the daylight hours. They move swiftly through their habitat, disappearing when pursued too closely, but reappearing a little further away if the observer remains motionless for a few moments. They can often be seen sitting in the tops of shrubs. They will nest in burrows or cavities in logs and trees. They eat seeds, berries, nuts, fruits, and insects. By November, adults stop gathering food and spend more time in the nests. The young must feed as late into the year as possible to catch up to the size and weight of the adults. Least chipmunks do not hibernate or put on excess fat in the fall. Instead, they survive the winter by entering torpor for long stretches of time, waking to eat food cached in the burrow.
Photo: Phil Armitage 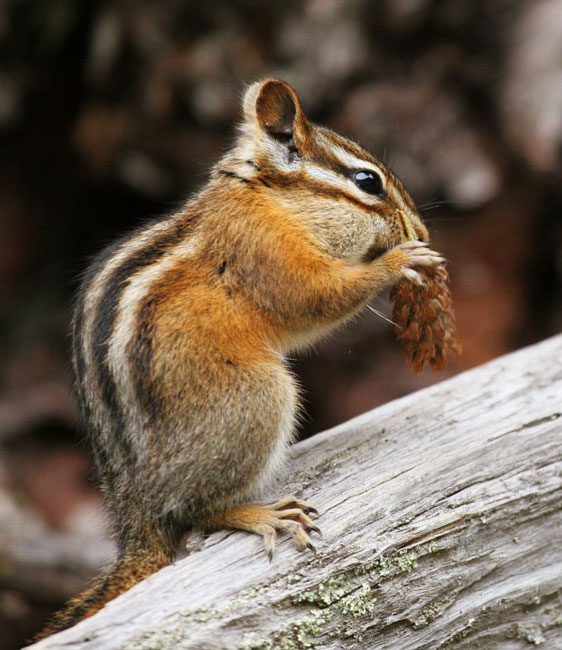 Allen’s Chipmunk (Tamias senex)
These chipmunks are forest dwellers that, in addition to climbing in trees, frequent dense thickets and rocky outcrops. They are only active during the daylight hours. The first of Allen’s chipmunks venture out from their winter dens in mid-March with the majority of them active from late April to early November. Seasonal diet includes beetles, fungi, fruit, nuts, grasses, plant roots, and conifer seeds. The Allen’s chipmunk is one of the few species of chipmunks in North America to put on a layer of fat to survive the winter months; they increase in weight by as much as 20 percent before November.

Young born usually in May but will remain underground until July.
Photo: Greg Schecter 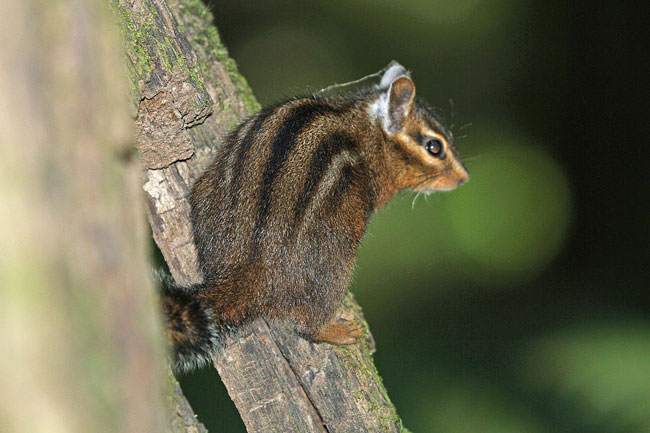 Yellow-bellied Marmot (Marmota flaviventris)
Often called rockchucks, the primary suitable habitats for the yellow-bellied marmot are boulders or piles of rocks and an abundance of succulent vegetation in close proximity. Slow and rather defenseless, in times of danger they retreat into crevices, small caves, and ledges of cliffs, and the deep labyrinths of great lava fields and rockslides.

Marmots seem to eat continuously. They have enormous stomachs that seem to be always filled to maximum capacity. Their diet includes a variety of plants but also insects and bird eggs. Since they are true hibernators and do not actively store fat, eating seems to be their primary mission during their aboveground activities

Marmots hibernate; body temperature, heart rate, respiration, and physiological processes decline to extremely low levels. In central Oregon, marmots emerged from hibernation the last week of February or the first week of March, adult males first, followed in order by adult females, yearling females, and yearling males. In June, the half-grown youngsters are normally out of their burrows.

Adults remain active for 135-150 days, entering hibernation by the end of July, or for juveniles mid-August.
Photo: DCRJSR 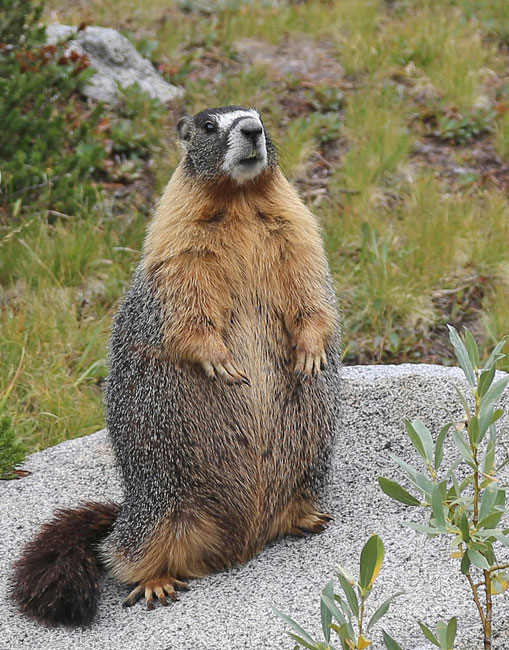 California Ground Squirrel (Spermophilus beecheyi)
It is considered among the most generalized of the ground squirrels as it inhabits grassy areas in a variety of habitats. They are active from dawn to dusk. It is commonly observed sitting on fence posts, stumps, brush piles, foundations of razed buildings, boulders, or other objects that extend above the grade, and occasionally up in trees. California ground squirrels accumulate fat in the summer and retire to underground burrows at the end of October and reappear more regularly mid-February. Their diet is mainly seeds, grains, nuts, fruits, and sometimes roots. Young begin leaving the burrows in early June at about eight weeks old.
Photo: Joseph C. Boone 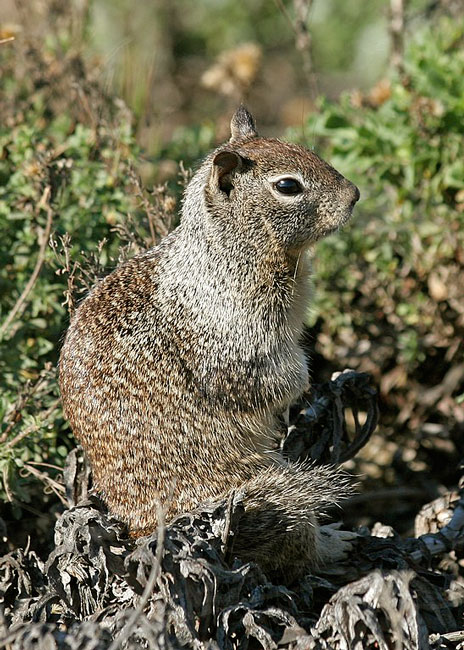 Belding’s Ground Squirrel (Spermophilus beldingi)
They may live in steppe and shrub-steppe areas, particularly in meadows, sagebrush flats, and sometimes in openings in woodlands. They are inactive for seven or eight months out of the year. They commonly forage for green vegetation, fruit, seeds, mushrooms, and are known to eat birds and insects. When they disappear depends on when the summer sun becomes hot enough to dry the vegetation, usually around mid July. In preparation, these squirrels become obese as they must rely on body fats for energy during dormancy. When they reappear depends on when the sun is warm enough to start the green vegetation of spring growing around mid March. Young usually begin appearing in the meadow sometime in early June.
Photo: Yathin S. Krishnappa 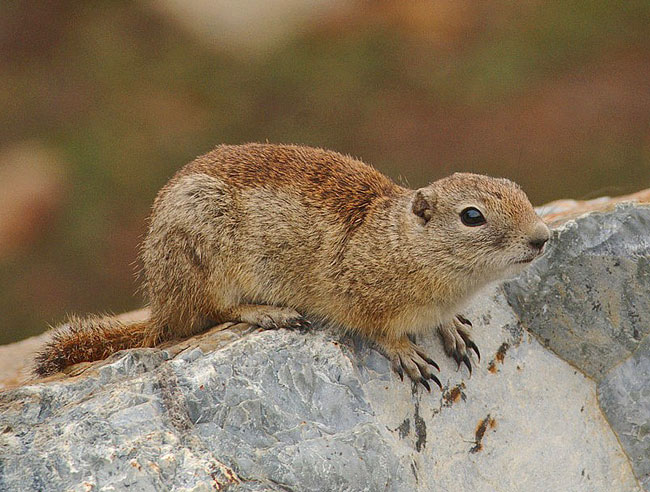 Golden-mantled Ground Squirrel (Spermophilus lateralis)
This ground squirrel is found in open grassy or rocky areas in Ponderosa pine, Douglas-fir, Lodgepole pine, and true fir forest. It can be found from the upper edge of the juniper belt to above timberline. Given rocks for shelter, it is even found in meadows surrounded by sagebrush. The Golden-mantled ground squirrel is active during the daylight hours from late winter/early spring to mid autumn. Most of its activity is confined to the ground where it travels rapidly among stumps, logs, or other slightly elevated prominences.

They feed on pine nuts, acorns, herbs and shrubs, fungi, many kinds of insects, eggs, young birds, lizards, carrion, and human foods when available. In late summer, it is highly visible as it scurries about gleaning seeds. Golden-mantled ground squirrels are less sociable than other ground-dwelling squirrels; they are too concerned with eating and hoarding food. By mid September or early October, the now obese squirrels enter their dens and settle in for their winter hibernation. Hibernating squirrels can be roused by either unusually warm, they may wake up during severely cold temperatures to raise their body temperature enough to prevent freezing to death. While awake, a squirrel will partake of a sizable meal from its stored food before retreating into dormancy again. They normally reappear some time in April or May.
Photo: Frank Schulenburg 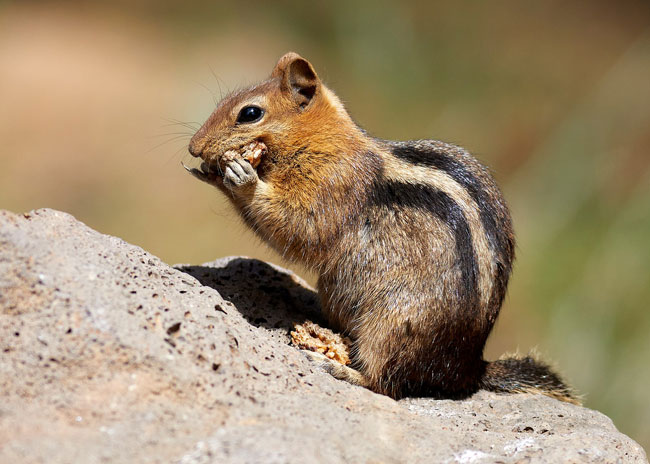 Western Gray Squirrel (Sciurus griseus)
The Western gray squirrel is the largest tree squirrel in the state. They live in Ponderosa and Douglas-fir forest mixed with deciduous trees. They are also present in riparian areas. They sometimes occupy urban parks where natural habitat is nearby.

They are commonly associated with mixed forest communities. During the summer, Western gray squirrels build large stick nests in trees 50 feet above ground. In winter, they take up lodging in tree cavities. Their diet consists of pine cones, nuts, berries, insects, and fungi. Many of the seeds and nuts are stashed away for later use. They make their caches in forked tree branches, under fallen logs, or buried in the ground. When they forget about a food cache, the seed germinates and replenishes the plants on which they feed. They do not hibernate; they remain active during the daytime hours throughout the year. Like all squirrels, they prefer mild weather and will not leave their nest during stormy conditions.
Photo: Alan Schmierer 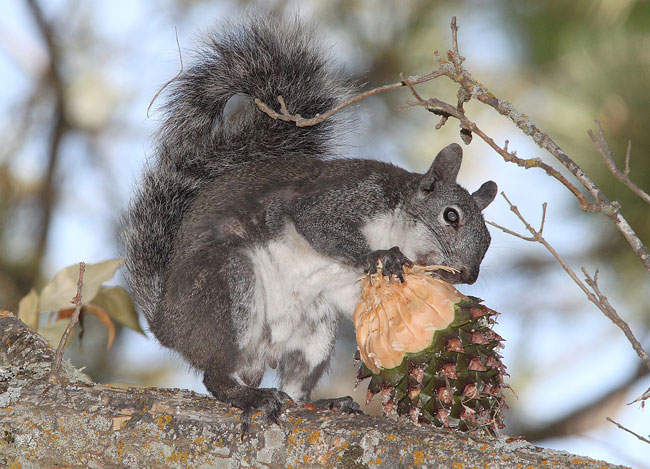 Douglas’ Squirrel Tamiasciurus douglasii
This squirrel, also known as a chickaree, is a forest-dweller, typically found in coniferous forest but will also use deciduous trees within the forest. They are distinguished by small tufts on top of their ears. Although they eat green vegetation, mushrooms, and fruit, they mainly eat the seed of pine cones. Douglas’ squirrels are active during daylight hours year-round, although they may remain in their nests or tree dens for a day or two during inclement weather. Summer nests are built on tree limbs, but in winter usually are spent in holes in trees. They defend a territory as large as 2 acres. They have large repertoires of calls and noisy lifestyles. 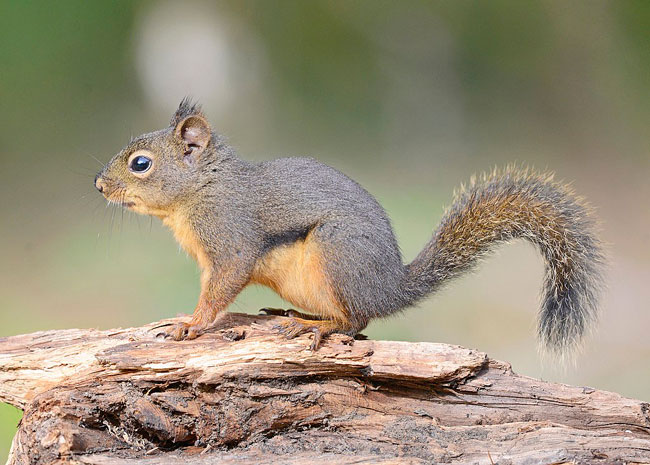 Northern Flying Squirrel (Glaucomys sabrinus)
They use coniferous, mixed, and deciduous forest. They can be found feeding on the ground along streams and at forest-meadow transitions. They live in holes of trees; if those are unavailable they will build nests of moss, lichen, and shredded bark in a fork formed by a tree limb. Northern flying squirrels are usually active all year for two hours immediately after sunset, and one and quarter hours in the few hours before sunrise. During the summer, the squirrel feeds almost exclusively on underground fungi. It also includes nuts, seeds, fruits, insects, and green vegetation.

The flying squirrel has been observed jumping from a tree height of 60 feet to glide to a point 160 feet away. Young are commonly born in May-June. Adults stay warm throughout the winter by aggregate nesting with 5-10 other individuals.
Photo: Bob Cherry