If you find an injured or orphaned weasel, skunk or badger, click here.

American Marten (Martes anadensi)
It is a forest species capable of tolerating a variety of habitat types if food and cover are adequate. They prefer mature forest with closed canopies, but sometimes use openings in forests if there are sufficient downed logs to provide cover. They are not found in dry woodlands. They are active mainly at dawn but they are rarely seen because they are usually up in the camouflaged branches. Martens are active year-round, although they may remain in their dens for a day or two during inclement weather. They commonly use elevated perches from which to pounce on terrestrial prey; they also may follow tracks of prey in snow, excavate burrows, enlarge openings to tree dens, and rob bird nests. Their diet includes small rodents.

Winter forces them to the ground more, when they hunt voles and hares. Young are commonly born in April.
Photo: Tim Gage 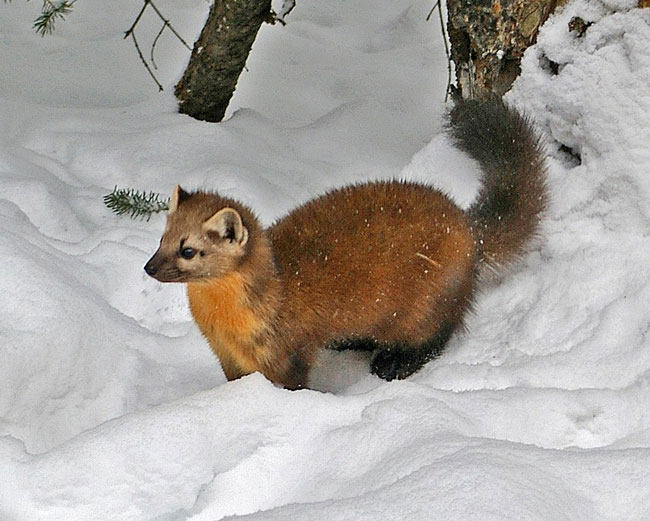 Ermine (Mustela erminea)
In Oregon, most Ermine are found west of the Cascade Range, but a few are found in eastern Oregon. They are also called short-tailed weasels and inhabit a variety of forest and riparian areas. They are frequently in brushy areas and edges of forests rather than the forest interior. They are active all year primarily nocturnal, but, on occasion, can be seen during the day. They eat voles and small rodents. At higher elevations, they hunt prey under a layer of snow. They use hollow logs, spaces underneath rocks, or burrows of other species for dens. The weasels have to eat around 30 percent of their body weight daily, and more in winter.

In the mountains, they molt from a brown coat to a white winter coat. Male and female ermines do not associate except during the breeding season, a period when juveniles remain in nests under maternal care. 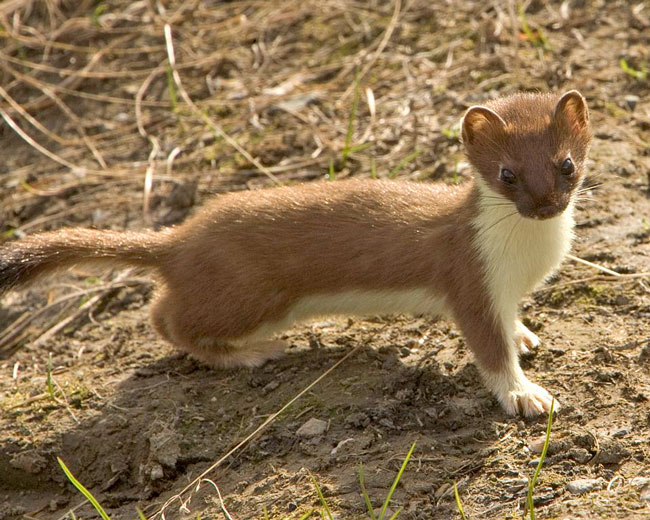 Long-tailed Weasel (Mustela frenata)
They occur in riparian areas and forests, but they also can be found in alpine communities above timberline and far out into arid desert of eastern Oregon. Long-tailed Weasels are active throughout the year. Although they sometimes are considered to be nocturnal, they are often active during the daylight hours. Its primary prey consists of mice, rats, squirrels, chipmunks, shrews, moles, and rabbits. Weasels can swim and climb but they mostly hunt on the ground. When snow is on the ground, they often seek prey by burrowing beneath the snow.

When the Long-tailed Weasel is irritated, its tail becomes twice the usual size as all the hairs stand straight out; it may also stamp its front feet and hiss. If further irritated, it emits some musk and may attack. Young are commonly born April-May.

Mink (Mustela vison)
In Oregon, the mink is found throughout the state and is associated with river, lake, pond, or marsh environments. Mink are active year round and are primarily nocturnal. They forage along overhanging banks, looking for rodents, fish, amphibians, and crayfish. They are a good swimmer and can dive as deep as 16 feet. The mink digs its den in river banks or it finds a hollow log or an abandoned beaver or muskrat den. It never uses the same den for long.
Young are born in April or May; weaning is begun in five or six weeks, and when about eight weeks old, the young attempt to capture their own prey. A family of 2 to 10 kits normally remains together until November. 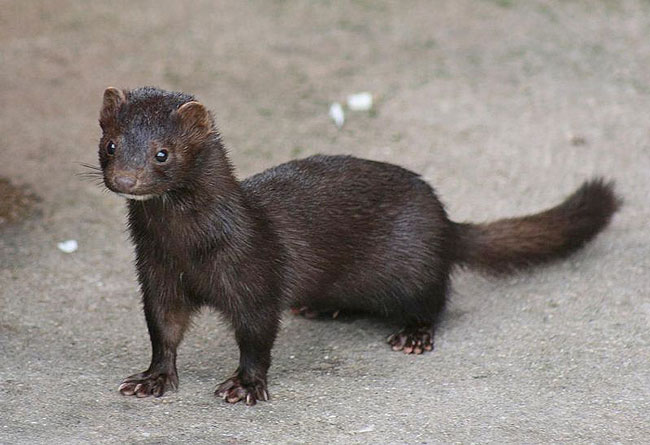 American Badger (Taxidea taxus)
American Badgers are generally found in grassland, desert, dry forest, and agricultural areas. They require soils that allow the excavation of den sites and support burrowing prey species like ground squirrels. They are largely nocturnal but occasionally may be seen abroad during daylight hours. Badgers have excellent senses of hearing and smell.  Both serve in locating food species, which are usually rodents in underground dens.

Badgers have been known to plug the exit holes of prey species before the badger tunnels underground to capture the prey. The long claws serve to loosen the soil and pass it backwards where the hind feet kick the soil out behind the digging animal. Badgers do not hibernate but they do sleep for extended periods especially during extended periods of cold weather and deep snow. Wintering dens can sometimes be found in woodlands, where the frost does not penetrate as deeply. They can stay underground for weeks at a time, but they come out to hunt occasionally as they do not store food.

In springtime, female badgers give birth to litters ranging from one to five pups. The young badgers stay in their grass-lined den, nursing until 3 months of age. Juveniles may emerge from the den as early as 2 months but stay with their mother until 5 to 6 months old.

Some badgers have demonstrated that they will tolerate a fox or coyote sharing the same den. In 1871, a lost Canadian boy shared a den with a badger, which at first tried to drive him away, and then appeared to adopt him by bringing him food. They sometimes team up with coyotes to flush rodents from cover.
Photo: Yathin S. Krishnappa 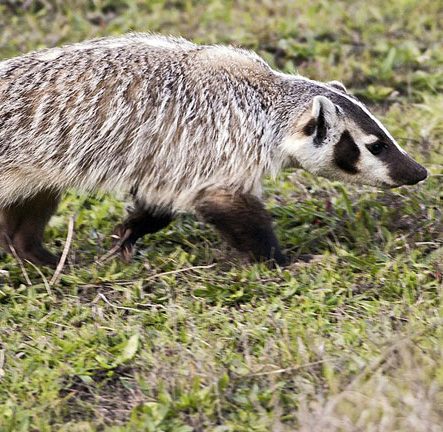 River Otter (Lutra anadensis)
In Oregon, River Otters are mostly found west of the Cascade Range but have been found in eastern Klamath County and in Deschutes, Wallowa, and Malheur counties. The River Otter is associated with river, lake, pond, or marsh habitats but may make extensive overland excursions from one such habitat to another. Otter dens normally are burrows that have been appropriated from some other animal and renovated by the otter.
Otters are active throughout the year and are primarily nocturnal. Though they are primarily active at dusk and throughout the night, they have been seen during mid day. They are more active at night in summer and more active during the day in winter.
They are active swimmers, and may move as far as 50 miles up and down a stream.

In addition to the adult male-female association during the breeding season and the maternal female to young association, a variety of groupings of otters in different sex and age-classes have been observed.

During the breeding season, males may travel considerable distances over land.

The mother generally leads the way in traveling, calling her young. Should the young  try to rush ahead of her, she nips their noses. When so punished, a youngster drops to the ground and lies there quietly.

They have no natural predators. 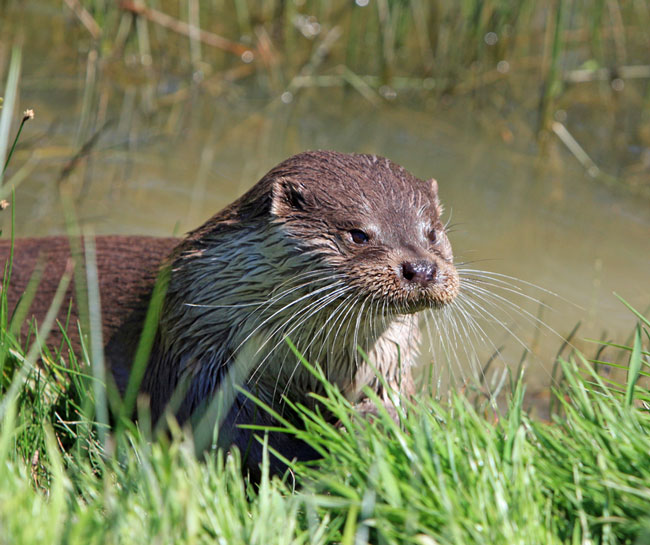 Western Spotted Skunk (Spilogale gracilis)
In Oregon, this skunk occurs throughout most of the state but it is believed not to occur in most of the Willamette Valley. It lives in coniferous forests, riparian woodlands, thickets in canyons, and rocky hillsides; it does not hibernate, but tends to be less active during periods of unusually cold weather. It is primarily nocturnal and highly secretive. Dens may be located in crevices in rocks, under piles of rocks, under or within buildings, or in hollow standing or fallen trees. Under some conditions, a skunk may dig its own den, but more often the deserted burrow of some animal is appropriated and renovated.

Whenever possible, they will climb a fence post or a tree to avoid dogs and people. Although equipped with a superb defense system, the Western Spotted Skunk tolerates considerable disturbance before resorting to the use of musk. They give definite warning signals. One common signal is the rapid stamping or patting of the front feet on the ground that can plainly be heard 6 feet away. Another common warning of anger or fear is the handstand in which the skunk balances on its front feet, tail high in the air. If it is still feeling threatened they will raise its tail; if the bluff is effective and the skunk begins to feel secure, all is well, if not, a stink ensues. 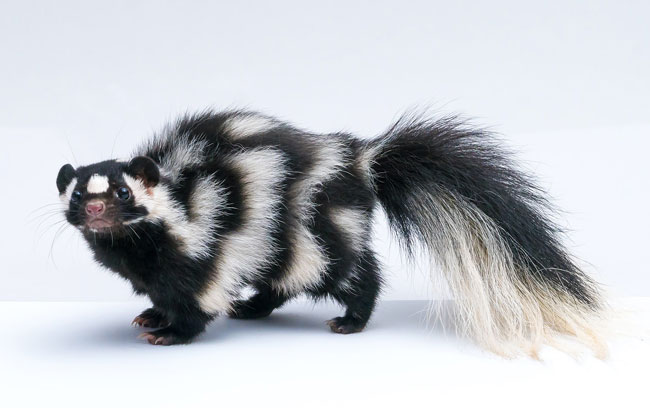 Striped Skunk (Mephitis mephitis)
It occurs in suitable habitats throughout Oregon, except in higher elevations, usually in more open habitats. May be found anywhere around meadows, farmland, and even the shrubs of towns. They seem quite well adapted to living within the proximity of human habitation. Striped Skunks are primarily nocturnal, and may be inactive for considerable periods during winter snow. They prefer brushy or rocky areas, but will forage in open pastures. They are usually found near water. In winter they often den communally

Striped Skunks tend to be docile and unobtrusive; except during breeding season or when infected with rabies. Besides rabies Striped Skunks can carry leptospirosis and tularemia, all of which are highly infectious to humans.

Any skunk that is active during daylight and/or appears to be sick should be left alone.

Young are commonly born in May.
Photo: Dan & Lin Dzurisin 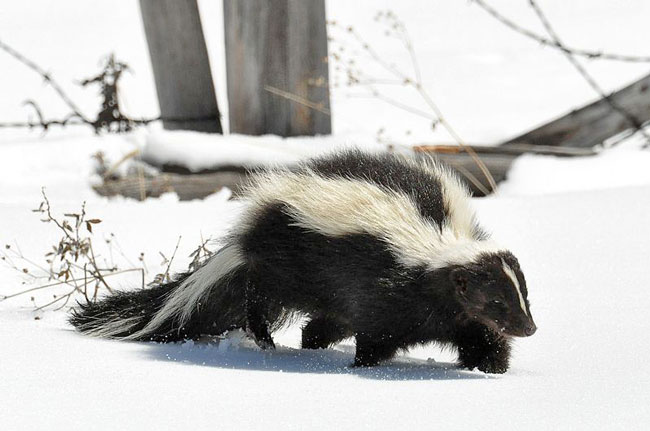