Lead Poisoned Golden Eagle to Be Released Back to the Wild

Bend, Oregon – Think Wild will release a female golden eagle back to the wild this weekend after suffering from nearly fatal lead poisoning.

Think Wild received the large, 11.2 lb. bird on November 18 after a passerby found her slumped under a tree, unable to stand or fly with blood in and around the nostrils. Upon intake, the eagle tested positive for lead toxicity at 49.5 micrograms per deciliter (ug/dL), nearly five times what is considered subclinical in wild raptors (10 ug/dL).

Think Wild staff treated the golden eagle with injectable chelation therapy over the last few weeks. The chelating agents bind to the lead molecules, allowing it to move through and out of the bird’s body. As of this week, the eagle tested subclinical for lead levels and demonstrated improved, alert behavior. Think Wild staff transferred the eagle to the Center’s new Raptor Flight Rehabilitation Enclosure for flight and mobility conditioning prior to her release back to the wild, scheduled for this weekend.

This will be Think Wild’s second golden eagle release this month, and also the second to be radio-tagged and tracked for a U.S. Fish and Wildlife Service conservation research program that aims to analyze the success and survival rate of Golden Eagles post-rehabilitation and release. She will be the 15th eagle to be tracked as part of the program, and the 5th from the Pacific Northwest.

Eagles found with lead poisoning are also said to have “lead intoxication.” They may appear drunk, with balance and coordination issues, lethargy and wing droop. Symptoms can also include leg paralysis, muscle wasting, dehydration, and anemia. The vast majority of lead-poisoned eagles don’t survive, and oftentimes those that are found must be humanely euthanized due to irreversible organ, muscle, visual, bone and brain damage.

Lead from ammunition and fishing sinkers are the primary sources of lead toxicity in many species, like this golden eagle. It is likely that she recently fed on a carcass left behind by a hunter that contained fragmented lead ammunition. Raptor lead toxicity increases during hunting season as gut piles or unrecovered game contaminated with lead are ingested by eagles, raptors, corvids and many other species, resulting in multiple food chain toxicities. Golden eagle nests that are near farms and 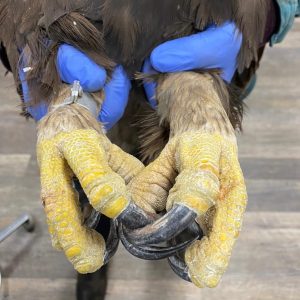 agricultural areas can also be susceptible to toxic lead accumulation when lead shot is used for pest control, as adults may feed poisoned rodents to their nestlings.

People can prevent lead poisoning in wildlife by using non-lead ammunition, fishing sinkers and rodent control. If you choose to use lead, bury dressing piles and keep the lead away from any sources of water. If you see an eagle or any bird with symptoms of lead intoxication, please contact Think Wild’s Wildlife Hotline at (541) 241-8680. Do not attempt to capture or offer food and water to injured wildlife without first contacting a licensed professional. Golden eagles are protected in the United States by the Migratory Bird Treaty Act and the Bald and Golden Eagle Act.

Think Wild is a 501(c)(3) non-profit organization, and tax-deductible donations can be made at www.thinkwildco.org/donate or mailed to PO Box 5093 Bend, OR 97708.

Think Wild is a 501(c)3 non-profit organization located in Bend, Oregon. Our mission is to inspire the High Desert community to care for and protect native wildlife through rescue & rehabilitation, outreach/education and conservation.