Bend, Oregon — A pair of osprey fledglings are being treated for injuries sustained due to entanglement in hay rope at Bend Wildlife Hospital, Think Wild. The two young birds of prey are currently being monitored after emergency surgery to remove the rope from their legs, which had prevented them from fledging successfully and may be causing developmental issues. Think Wild urges the public to be aware of the consequences to wildlife due to the improper disposal of garbage. 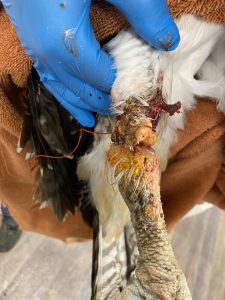 The two osprey siblings were brought to the center by a concerned citizen who had witnessed them fledge from their nest and crash to the ground. Their mother had likely used hay rope to make the nest, as bits of rope could be observed woven into the nesting material. The chicks had developed and grown with the cordage entangled and binding their feet. When they finally fledged, leaving the nest for their first flight, the rope was entwined in their legs, and they could not move properly. Upon intake of the birds, Think Wild veterinarian, Dr. Laura Acevedo, observed that the rope was deeply set into the bird’s legs, almost to the bone.

​​“We give the injuries in this area a guarded prognosis because of the lack of overlying tissue protecting those important ligaments and tendons that control the digits,” said Dr. Acevedo, Think Wild Veterinarian. “It’s amazing the perfection that these birds have as hunters – because of that, we can’t send them back out being any less than 100%. Their medical care and healing process demands perfection in return – and we’re willing to give them that chance.”

The injury appears to have caused developmental disabilities and a failure to thrive. Even after surgery to remove the rope, the osprey cannot stand. The pair continue to huddle together as if still connected because they’ve never known anything else. Think Wild’s prognosis for the birds is very guarded as they wait to determine if their legs will heal enough that they can stand on their own and how they adapt to life without being connected to each other. 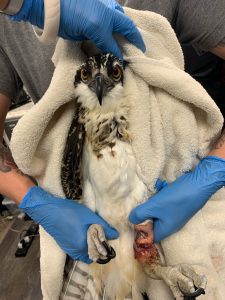 Expenses for the bird’s care are ongoing and include a daily supply of fresh fish for their diet along with medical supplies. Donations can be made directly to Think Wild at www.thinkwildco.org/donate or Venmo @thinkwildco.

Think Wild urges citizens to remember that even small amounts of trash can be devastating to wildlife. Plastics and small pieces of rubber can be picked up by foraging birds who are unable to digest them, resulting in the blockage of their digestive tracts. Rope, twine, and fishing line can entangle birds, cause cuts or amputations to the wings, legs, feet, or neck. Even small amounts of oil or grease can damage a bird’s plumage, making it difficult for them to fly and regulate its body temperature.

Osprey are Oregon’s state raptor, and they are protected by both state and federal law. They can be found in Central Oregon in the spring and summer, where they nest and raise their young before migrating south for the fall and winter.